Eliminate wait time when you call us! Learn More

The year was 1951, Harry S. Truman was President, I Love Lucy made its television debut on CBS, J.D. Salinger’s The Catcher in the Rye was published, Patti Page’s Tennessee Waltz became a hit record—and Bottini Fuel was born.

We asked our Dad to take some time out of his retirement to shed light on how everything got started 70 years ago. Read his memories in the article on this page. 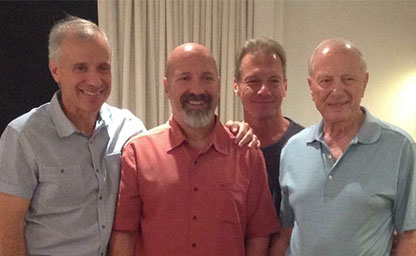 There are very few companies in the Hudson Valley who have been around for this long. That only happens when you’ve had the fortitude and commitment to get through tough times. We’ve had our share—including oil embargoes and old-fashioned winters with enough snow and ice to give Santa pause.

Through it all, we’ve tried to keep customers the center of our universe, and serving them well has been our true North Star.

We like to think that is the biggest secret to our longevity, and we can’t tell you how much we appreciate the opportunity to take care of you—now and in the years ahead. 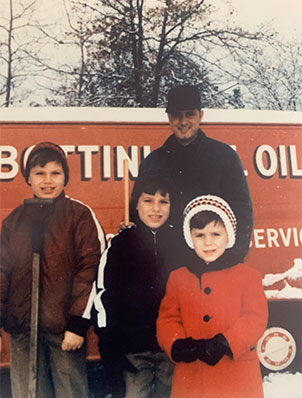 From left to right:  Rick, Brian, & Mark Bottini (with their father, Anthony Sr. behind them)

The birth of Bottini Fuel

Born in Wappingers Falls to immigrant parents from Central Italy, Anthony Bottini Sr. got his first taste of the heating fuel business when he started helping his uncle, Dominick Bottini, make kerosene deliveries to local families.

“It was a small business, just my uncle and the truck,’ Anthony recalls. “His health had started to fail and he could no longer manage all of the heavy lifting involved. So, he asked me to join him for a season. He would drive and I would deliver 50-gallon barrels of kerosene for people to use in their heaters.”

Anthony said if his uncle’s customers didn’t live on the ground floor, kerosene would be delivered up the steps in five-gallon containers.

Soon after Anthony graduated high school in 1949, his uncle passed away. Anthony bought the business from his aunt in 1951 and started growing his fuel oil business.

“So now it was just me and the truck. I was able to grow my business, one customer at a time, by going to neighborhoods and speaking with people. The village was populated by a lot of Italians and I could speak a little Italian so I was able to build a level of trust. But it took a lot of hard work to make the business successful.”

Fortunately, the area was growing by leaps and bounds due to the continued expansion of the IBM plant.

“My father, Louis, worked for IBM. My mother, Susan, was a dressmaker,” said Anthony. In addition to Anthony, the couple had a second child, Bertha, who has passed away.

Anthony said as the population continued to grow, his business began to flourish.

“Fuel oil, both kerosene and heating oil, really blossomed because of that. As I got more customers, I could afford to hire one man on a part-time basis.”

Jean: the most important ingredient to success

Anthony said another boost to his business occurred when he married his wife Jean in 1957.

“I was on the road for long hours and she worked from home answering phone calls from customers.”

Anthony said he could never have accomplished what he did without her.

“We set up an office in our basement and Jean acted as the answering service. But she had another important job—being a mother. Our first two sons were born 10-and-a-half months apart. Talk about hard work. I’m the one who had it easy.”

Anthony and Jean are still together, though they passed the business on to their three sons in 1984. The couple split their residence between New York during the warmer weather and Florida for the winters.

“I was really ready to retire when I reached my fifties. This business is hard enough when you’re young. I was proud that my sons, Rick, Brian and Mark, all wanted to continue with the business.”

Anthony’s three sons have blessed him with nine grandchildren. He also has one great-grandchild.

Anthony said he is also proud of Bottini Fuel’s efforts to always take care of its customers, no matter how tough conditions became.

“The oil embargoes we went through were some of the toughest times. But I’m proud to say that we never had to cut one customer’s heating oil account or restrict their supply in any way. We managed to get through it all. But that’s what you do when you’re in this business. You find a way.”

Check out our Facebook page throughout the year to see more happenings as we continue to celebrate our 70th anniversary!